Some background and insights on my projects, feel free to contact me at @rajcs4.

Tree based methods excel in using feature or variable interactions. As a tree is built, it picks up on the interaction of features. For example, buying ice cream may not be affected by having extra money unless the weather is hot. It is the interaction of both of these features that can affect whether ice cream will be consumed.

The traditional manner for examining interactions is relying on measures of variable importance. However, these measures don’t provide insights into second or third order interactions. Identifying these interactions are important in building better models, especially when finding features to use within linear models.

In this post, I show how to find higher order interactions using XGBoost Feature Interactions & Importance. This tool has been available for a while, but outside of kagglers, it has received relatively little attention.

As a starting point, I used the Ice Cream dataset to illustrate using xgbfi. This walkthrough is in R, but python instructions are also available at the repo. I am going to break the code into three sections, the initial build of the model, exporting the files necessary for xgbfi, and running xgbi.

The next step is running xgboost:

To better understand how the model is working, lets go ahead and look at the trees: 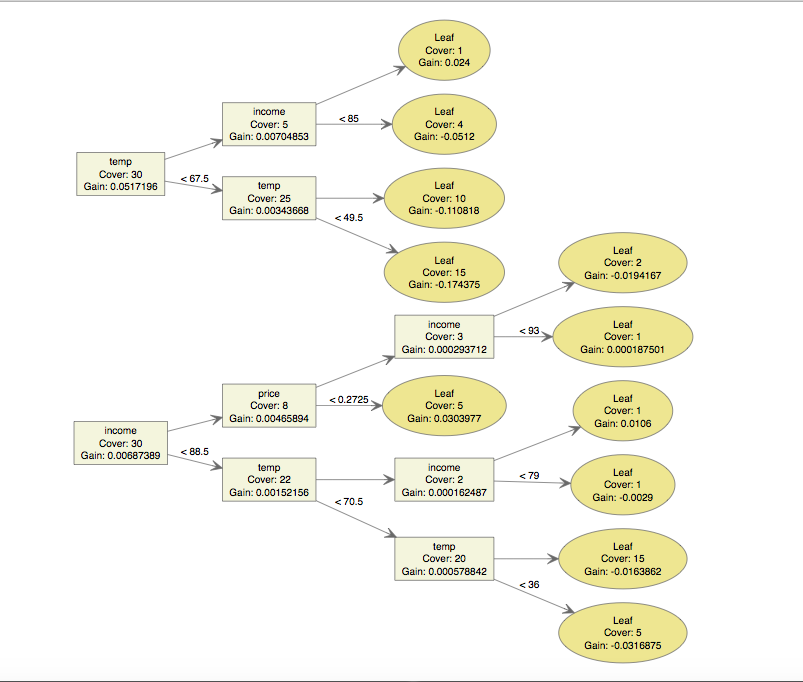 The results here line up with our intution. Hot days seems to be the biggest variable by just eyeing the plot. This lines up with the results of a variable importance calculation:

The next step involves saving the tree and moving it outside of R so xgbfi can parse the tree. The code below will help to create two files that are needed:xgb.dump and fmap.text.

The first step is to clone the xgbfi repository onto your computer. Then copy the files xgb.dump and fmap.text to the bin directory.

After the application runs, it will write out an excel spreadsheet titled: XgbFeatureInteractions.xlsx. This spreadsheet has the good stuff! Open up the spreadsheet and you should see:

It is now possible to rank the higher order interactions. With the simple dataset, you can see that the results out of xgbfi match what is happening in the tree. The real value of this tool is for much larger datasets, where its difficult to examine the trees for the interactions.